NVMe vs SSD vs HDD

NVMe (Non-volatile memory express) is the latest way to attach storage to a computer.  Rather than using the IDE or SATA connectors of previous drives, it connects directly to PCI Express to allow for faster access.

Our history of storage

Our first servers, back in 1999, used IDE connectors to connect to our hard drives.  These used a ribbon cable to connect to the motherboard, with 40 pins on each end.  This December 2005 manufactured Western Digital Caviar Raid Edition drive was the last one we had in use: 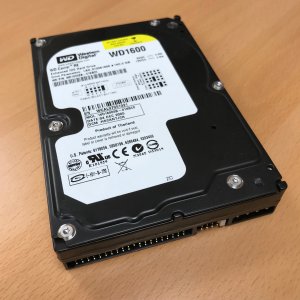 With a theoretical maximum speed of 133MB/sec (increased from the original 16MB/sec speed when first released) these disks often became the bottleneck on a server.  This would occur even more so as you could have two drives on one cable, meaning the ultimate speed was shared between the two.

Next up, came SATA.  With it’s much smaller plugs and vastly increased speed – originally 150MB/sec but raising to 300MB/sec with revision 2 the improvements were significant.  Capacity increased also happened quickly – we started using our first 1TB+ capacity drives in 2007: 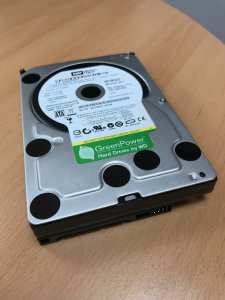 The first SSD (solid state drive) was actually released by SanDisk in 1991.  It had a 20MB capacity and a $1,000 asking price. SSD didn’t really become commonplace until around 2011.  Even then, usage was low due to the much smaller capacities and much larger cost compared to HDD.

You now frequently see server and web hosting companies proudly advertising their use of SSD in their servers.  They do make a huge difference to performance, use less energy and have the capacities available to meet users requirements.  We switched all servers to SSD in 2015. 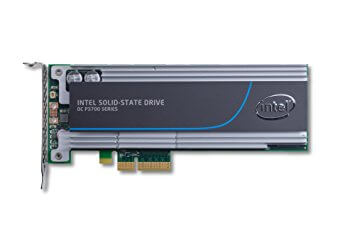 Linux too, hdparm, allows a system administrator to benchmark read performance of their drives.  We ran this across three identical systems – all with Intel Xeon E3 processors, 32GB RAM and drives running in a RAID 1 array.

You can see that SSD offers a significant speed benefit over HDD in terms of raw data transfer – 180MB/sec higher.  But look at NVMe.  More than 7x faster than the SATA HDD and an astonishing 4x faster than SATA SSD. 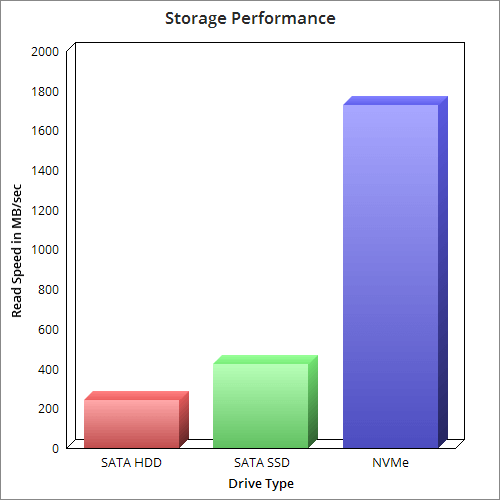 Running a random IO test with the benchmarking tool from Hidden Refuge:

Here the SSD absolutely trounces the HDD – almost 4x faster – but the NVMe comes in almost 2x as fast again.  7.6x faster than the HDD. 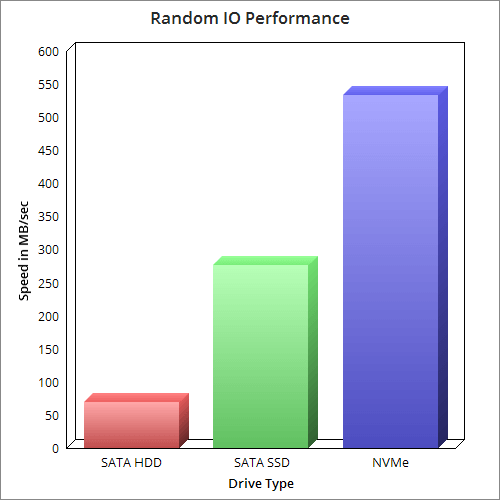 NVMe drives command a premium above their SSD counterparts, but the gap is significantly smaller than the performance gain.

All web hosting servers at NetWeaver use enterprise NVMe disks exclusively – ensuring your website remains as fast as possible at all times.