Here at NetWeaver we are big fans of linux and it’s many derivatives.  We have used CentOS and Ubuntu exclusively for our servers for a number of years now, and even use a form of Linux for most of our desktops – allbeit ChromeOS (with the rest running OS X, a BSD spinoff).

I decided to try out some flavours of Linux, both out of general interest and ready for our next round of hardware refresh – and here is my musings on one of those flavours – Solus.

Their own description of Solus made a very positive start:

Solus is an operating system that is designed for modern PCs. Every tweak, configuration, and optimization enables us to deliver a singular, cohesive desktop experience.

So, I built a nice little Gigabyte Brix PC, ready for action. The download for Solus is designed to be installed on a USB stick, and the instructions of how to do it are very straight forward if you’re not familiar, so this was soon done.  Solus initially boots into a live mode, giving you the option to do a full install – first impressions were good so I opted to install.

The only vaguely complicated part of the install is creating your partitions, whilst not a problem for those used to setting up servers, an option to do this with recommended settings automatically would be great for those coming to linux for the first time.  After that, everything was just selected from menus, remove the USB, reboot and off you go.

Despite a modest Celeron CPU and 4GB of RAM, Solus booted in around 10 seconds from cold, and everything worked straight away – I didn’t have to install any drivers or change any settings, even hardware which can often be a struggle with Linux, such as Bluetooth and Wifi were working immediately.  Solus uses a custom software packing system, which works a lot like app stores from the big companies, and allows you to easily add software such as LibreOffice to the pre-installed basics such as Firefox and Thunderbird.  The same system also manages updates – and whilst there was quite a lot to install, it was quick and just required 1 reboot. 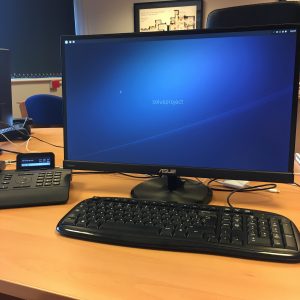 Over the course of the day, I found Solus very logical and easy to use, I did have one crash when installing updates, but nothing after that.  Most of the features are very well thought out and I cannot wait to try v1.2 when it comes out.  There’s a few things that still felt a little incomplete – installing Chrome was a faff and some of the options mean editing config files – but then, this is a work in progress and the developers are doing an amazing job creating a full Linux distribution, rather than just skinning Ubuntu as seems to be the current trend.  As a result of all this work the whole thing is much leaner, sharper and cleaner – just like a good OS should be.

It’s definitely worth giving Solus a try, and I’ll update my review when 1.2 is released.